QVC engineers at corporate engineering and Balemaster worked closely together to arrive at the right layout, the right sizing and the right orientation for the balers in the warehouse.

Balemaster worked together with the facilities engineers at QVC to specify a baler with the optimum mix of high volume performance characteristics.

In most applications balers are typically specified on the basis of volume – how many pounds per day can they accommodate. But in the warehouse and distribution business, a baler must be sized differently – after all, how much content is there in an empty box?

In many baler applications, such as commercial printing, the waste material is similarly sized – at least in the vertical dimension. But regardless of size, the waste typically has no rigid characteristics to speak of. Therefore, there is nothing about the content of the waste stream itself that prevents it from behaving predictably. In a nonwarehouse venue, the pre-baled density waste might be an efficient 1 – 3 lbs per cubic foot.

Conversely, in a warehouse environment dominated by rigid boxes, full of air, the pre-baled hopper density can be as inefficient as 1/4 lb per cubic foot.

The Problem at Rock Mount Solved by the Experience at Lancaster

At QVC’s Rocky Mount, North Carolina 1,800,000 sq ft facility, boxes of random size flow to the baler fast, and housekeeping is an imperative and handling the changeable flow means everything. Projecting flow accurately is predicated on the nesting factor and peak volume of the inflow. QVC discovered that calculating average flow serves no purpose. Necessarily then, and although it might strike some as counter-intuitive, the maximum or peak volume is the number to which the baler selection must be pegged.

Then comes the issue of redundancy. QVC’s Lancaster, PA facility had experienced more than one baler malfunction. That experience led the specification team to seek a baler supplier with the resources and experience to provide a solution built to fit the needs of the facility. This wasn’t going to be a case of buy a cheap baler, install it someplace outside near the loading dock, and try to forget about it. There’s a commonplace adage in the industry that goes something like: “Hammer to fit. Paint to match.” But that’s not a common adage at QVC. At QVC, the approach to facilities management is always accompanied by an emphasis on efficiency, safety, and productivity. There was too much at stake at the 1,800,000 sq. ft. state-of-the- art showcase facility in Rocky Mount, NC to invest in anything but the right solution the first time.

Some distribution centers install a baler solution that’s sized to accommodate average volume. And that approach works most of the time. But, at peak loads, an average baler load solution will slow the operation and fulfillment functions of an otherwise perfectly managed facility. The facilities engineers at QVC and the experts at Balemaster sized the baler solution at Rocky Mount for peak volumes.

What’s more, any inability to handle flow, when you know it’s coming the same time every year, is simply unforgivable. And any bump in the installed cost would be further offset by not just reducing (but totally eliminating) the back-pressure on the picking and filling infrastructure specifically and the general warehouse functionality generally.

Taking the Enterprise View, A Direct-to-Consumer Distribution Center is a Living Thing

Think of the warehouse as a dynamic entity – a living organism. Clearly, any loss of capacity to handle the waste stream ultimately backs up where it shouldn’t and causes operating and fulfillment problems. QVC reasoned that there were plenty of problems that needed solving of the random and unpredictable variety in the true added value/ customer service portion of their business. So why invite more stress and possibly compromise the customer experience by something as purely mechanical and potentially easy to solve as adequate and properly sized baler capacity. If ever there was one small thing that impacted the entire enterprise – the baler in a Direct-to-Consumer warehouse situation could be it.

Dealing with the Nesting Factor

In the warehouse operations and fulfillment distribution business environment, the baler will see different box sizes and box configurations. And depending on how they fall into the hopper from the conveyor, the baler must deal with cavities and pockets caused by refuse and waste (boxes) with different dimensions in multiple planes. All of them falling in random sequence to form unpredictable box nesting results. The larger the boxes, the larger the nesting factor. The smaller the boxes, the smaller the nesting factor. The larger the nesting factor (say 50%) and you must calculate a lot of air in the baler specification. And obviously, with a smaller nesting factor (say 25%) you must accommodate more material. QVC knew that they had to size the baler accordingly. A baler cannot be successfully sized on the basis of volume or average flow, unless when the seasonal highs occur and the baler sees peak flow. Boxes backing up on the conveyor and falling to the floor at the hopper is an acceptable operating condition. Which of course is not the case at QVC where cleanliness is part of the customer satisfaction solution. But there’s a further baler specification dichotomy – as the engineers at QVC discovered. Although the baler necessarily must be sized to accommodate peak flow conditions, operationally, it must be equipped to make bales at both peak and less than peak flow conditions. When peak flow does occur, the baler is cycling frequently and the ram is more or less in continuous operation. Operationally, the baler hopper should be recharging at the same time as the bale is being made and tied off automatically.

Horsepower means different things to different industries. But in the context of baler operations, it refers to the energy driving the hydraulics on the baler. More specifically, it typically refers to baler cycling speed. Technically, hydraulic systems have suffered from a near-universal shortcoming, namely, low energy efficiency. Systems that use fixed-displacement pumps are sized to meet peak loads and pressure demands. Variable-displacement pumps are sometimes used to improve efficiency by modulating output flow to meet changing requirements.

Tto provide additional energy efficiency, Balemaster took the concept of reduced hydraulic demand to adjust for reduced baler demand to a more precise level. Balemaster provided a dual motor/dual pump solution. Simply put, instead of one 60 Hp motor/pump hydraulic power unit, each baler was equipped with two 30Hp power units. The dual motor/dual pump concept allows QVC to operate each baler at half speed during seasonal lulls. When optimum design speed is called for, the dual power units work in parallel to provide unimpeded maximum performance. The dual unit design has the further advantage of providing an additional layer of redundancy – should one of the motors or pumps fail for any reason.

Why Balers and Not Compactors

Prior to specifying equipment for the baling operations at QVC, the facility’s engineering staff thoroughly investigated the corrugated/folding box disposal and recycling options. They knew the solution had to be one customized to seasonal flows, that it had to be process oriented, and one that could be cost-justified. Prior to the installation of the four Balemaster balers at Rocky Mount, four, 4-cubic yard compactors had been in place. There were two stations, and originally a single compactor at each station. Another compactor was eventually installed at each station. The dual compactors at each station saw a shuttle conveyor running between the two to accommodate the load. It turned out to be a less than ideal solution according to Peter Angstedt, QVC’s facilities manager.

A compactor, by its nature, is a small capacity solution. Compactors, for all their strengths in some applications, aren’t really designed to effectively handle the volume of built boxes that the QVC distribution center was generating. A compactor solution was eliminated early in the process. Not only wouldn’t the compactors be able to keep up with the heaviest loads, but they could also negatively impact process and overhead costs, such as:

By some estimates, the combined impact of all this on the bottom line, was in the neighborhood of $200,000 per year, or $0.11 per square foot under roof. These were largely avoidable costs and unacceptably high. Peter Angstedt was soon convinced that an alternative approach was required. And that the solution needed to be a first-class one, consistent with the rest of the Rocky Mount facility. He found such a resource in Balemaster.

Why Balemaster was the Preferred Solution

Located in Crown Point, Indiana and with many warehouse and distribution installations to its credit, Balemaster provided the solution that Angstedt sought.

QVC found an innovative solution in the Balemaster technology for the following reasons: 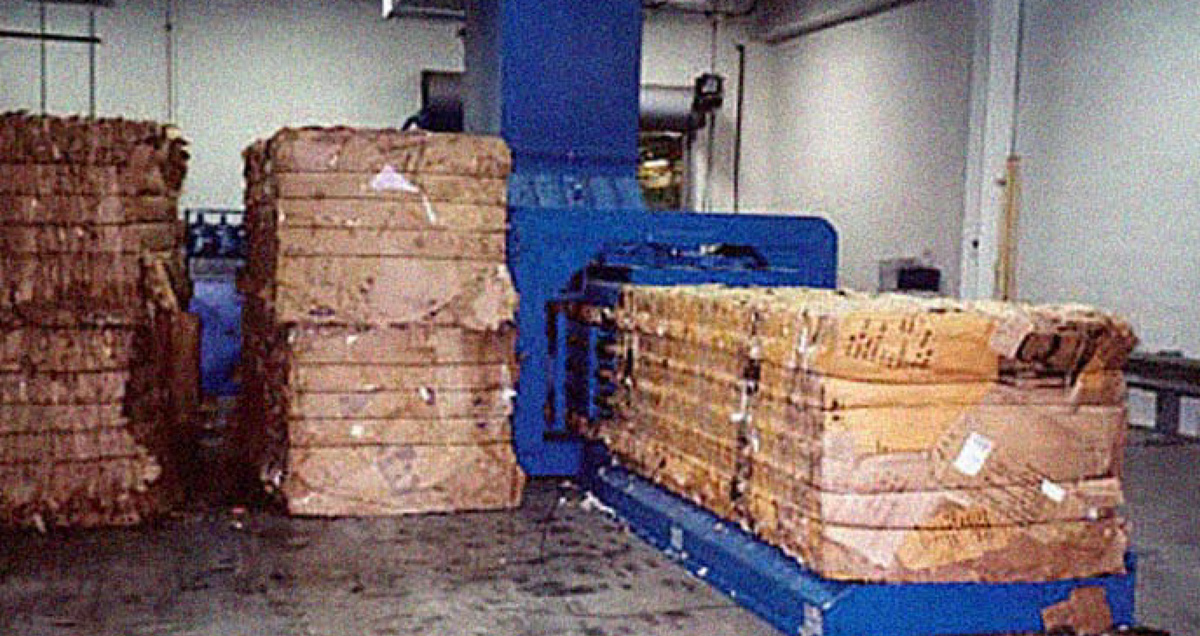 One of the high density, horizontal balers at QVC’s Rocky Mount facility. The bales are always crisp and dense. More material per bale means fewer bales and so reduced wire cost and transportation costs. The baler cycles less frequently and that means less maintenance.

Contact Balemaster about the full line of value added products available for your baling and shredding needs. We are experts at customizing high-productivity waste handling and recycling solutions, tailored to your exact application requirements.