Recycling companies, similar to most other companies, are looking for ways to save money on day-to-day operations. JMK Fibers, based in Tacoma, Washington, was looking for a way to save on its labor costs. The company chose Crown Point, Indiana based Balemaster for a solution.

“In 2005, we did research on a new baler that Balemaster was going to produce, the 6200 Fat Boy Baler that makes a bigger and denser bale,” said Doug Swan, plant general manager. “We found that this baler would allow us to save on labor and cut our loading times in half,” he added.

JMK Fibers found the Fat Boy baler to be more efficient than its previous baler.The Fat Boy Baler is capable of processing 30 tons of OCC and 50 tons of newsprint/mixed paper an hour with an average bale weight of 3,500 to 4,000 lbs. “This allows for more efficient shipping with the average container taking only 14 to 15 bales to make 52,000 lbs instead of the 28 to 30 bales with the prior machine,” explained Swan.

The company also found savings in its baling wire, material handling and shipping costs. “Since we installed the Fat Boy baler, we’ve been able to downside our baling wire size from a 10 to a 12 gauge, saving 40 percent on our baling wire costs,” he added.

JMK Fibers was pleased with the performance of the Fat Boy baler and the company purchased a second baler in late 2009. “Our facility is located in the Port of Tacoma. This is very good location for us because most of the material the facility processes is sold on the export market.”

The 90,000 square-foot facility processes about 9 to 10 thousand tons of recyclables per month, mainly from curbside recycling programs in Tacoma, surrounding communities and commercial accounts. Scrap materials that the facility recovers include OCC, ONP, other fiber grades, HDPE and PET, aluminum, and tin. Scrap is delivered to the facility from different several different suppliers.

When material is brought to the facility, it is processed through a sorting system manufactured by CP Manufacturing.“The system has an OCC screen for separating large pieces of OCC, a newscreen for separating newspapers, and a V screen for separating the remaining paper from containers,” said Swan. Prior to and after the mechanical sort, there are 14 - 15 employees who sort material by hand to remove contaminates and hand separate plastic containers. Aluminum is removed with an eddy current, steel cans via a cross belt magnet.

“We also do quality checks on finished material to make sure the percentage of prohibitive and out-throws are acceptable for our customers,” he said.

“Curbside collections have changed a lot of things for the recycling industry,” noted Swan, who has been in the paper recycling business since 1971. Commingled recyclables collected at the curb have required the recycling industry to invest millions in processing equipment. “Unfortunately, the quality of the material sorted is dependent upon the incoming material and the overall quality of recovered products is not as good as we would like,” he said.

“There is a collaborative effort by local governments, haulers, MRF’s, and end users to address contamination on incoming loads and material loss in our region.The findings and suggestions are due out soon and should shed some light on possible improvements to single stream collections.” 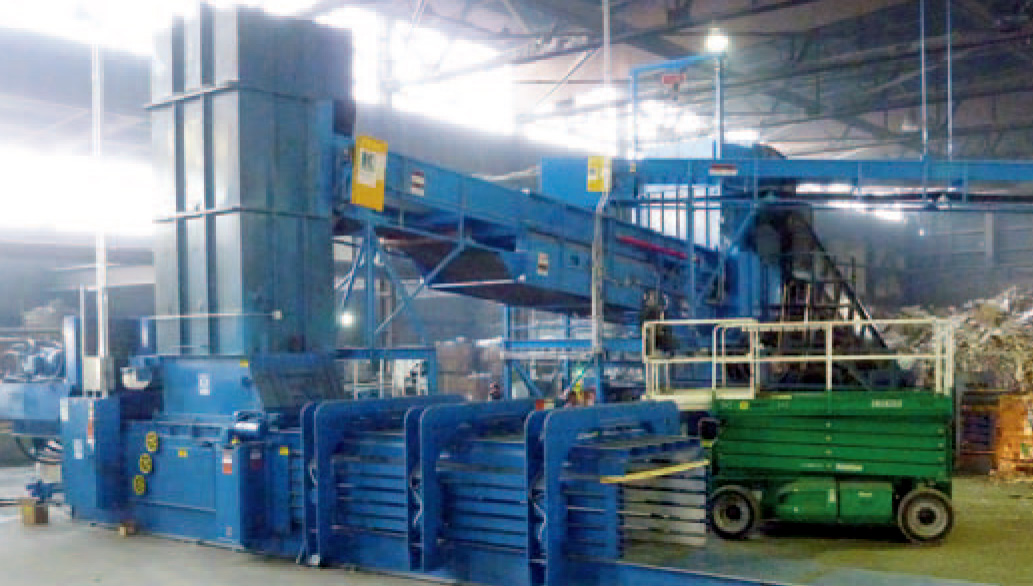 Contact Balemaster about the full line of value added products available for your baling and shredding needs. We are experts at customizing high-productivity waste handling and recycling solutions, tailored to your exact application requirements.